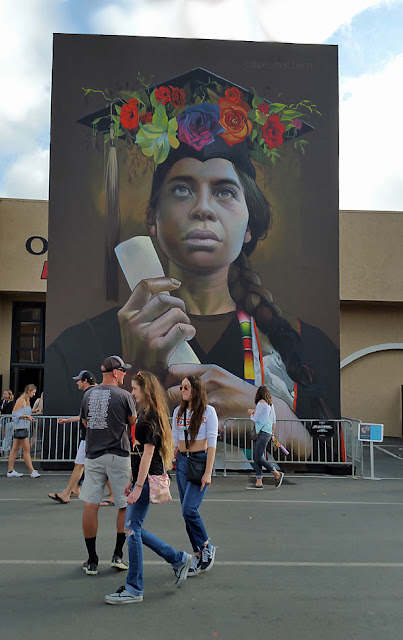 We went to the Kaaboo Festival in Del Mar on the 17th.  It was an all day music festival (actually, 3 days but we only went one day) that included a lot of nice art,  good food, and nice drink.  The people watching was fun too.  Some of the people were painted on canvas. 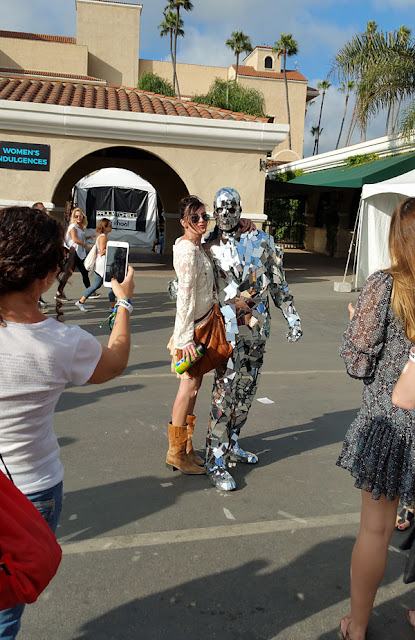 Some of the sparkle gets lost in a still photo, but you get the idea here. 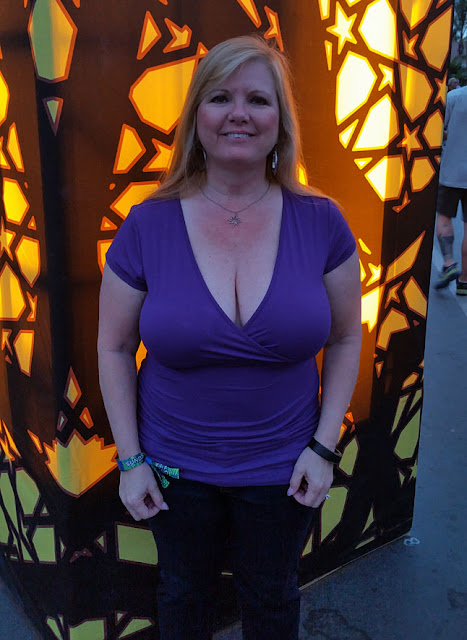 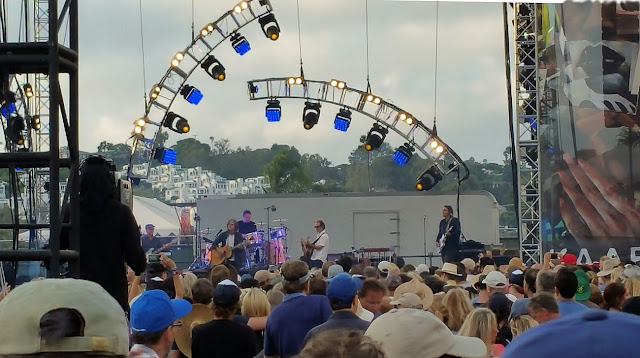 We mainly came to see Tom Petty, but decided to go early enough to see Jackson Browne also.  We were not disappointed.  In fact, I enjoyed Jackson just as much as Petty. 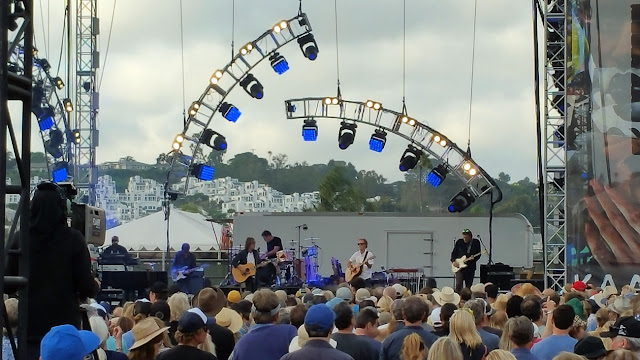 We may have missed it, but I didn't hear him do "The Loadout / Stay".  Perhaps he didn't have anyone with him who could hit those high notes.

He did do Running on Empty and it sounded great. 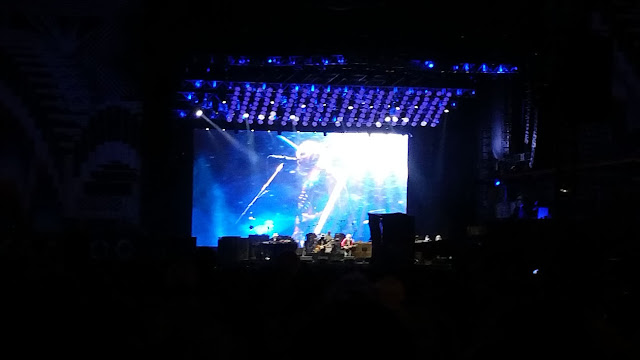 Tom Petty was very popular - it was packed!  A well behaved crowd.  It seemed to me he was still having a little trouble with his voice at the beginning, but it came around and the concert sounded great. 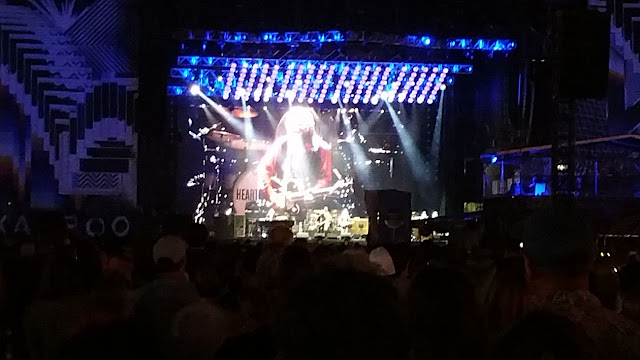 It was his 40th Anniversary Tour and we're not sure now many more times he'll make it around, so we made sure we saw him this summer.  Rock On Tom.

A Weekend In Sacramento 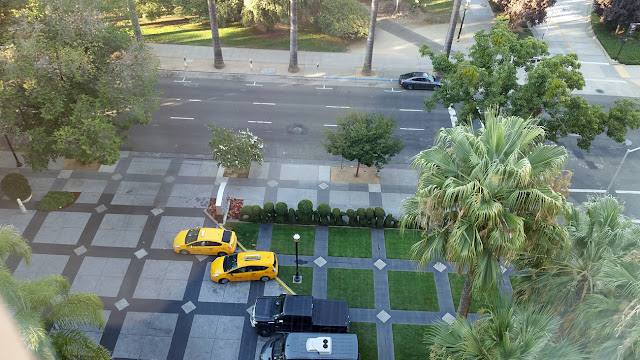 We went up to Sacramento to see my Dad and a Tom Petty concert.  Checked into a great hotel across the street from the state capital. 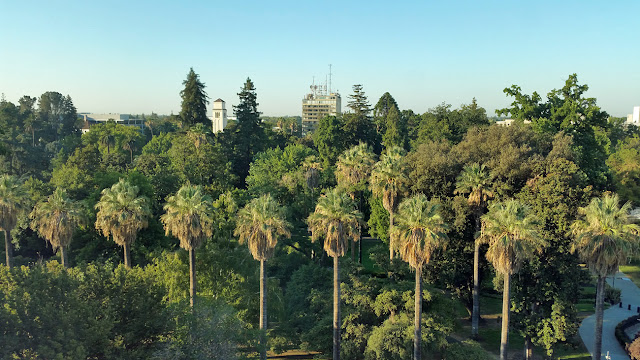 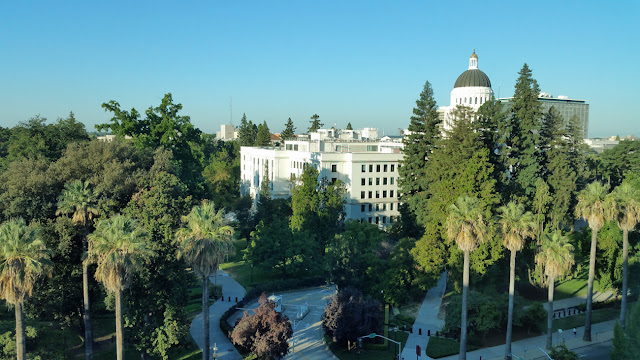 And here is the state capital itself, as seen from our room.  Unfortunately, the staff told us upon checkin that the Petty concert was canceled (laryngitis) which really put a damper on the weekend. 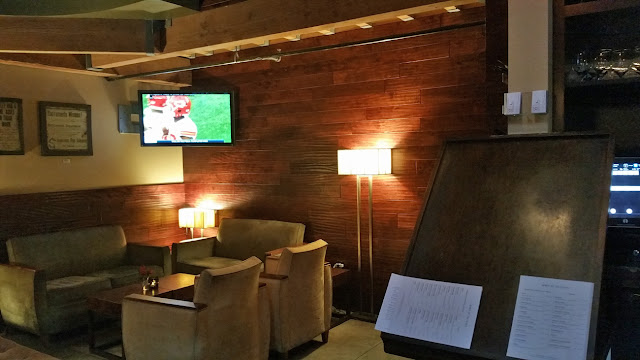 But when life hands us lemons, we make limoncello so we consulted with hotel staff on options in the area and found this wonderful wine bar for dinner - 58 Degrees and Holding.  Highly recommended! 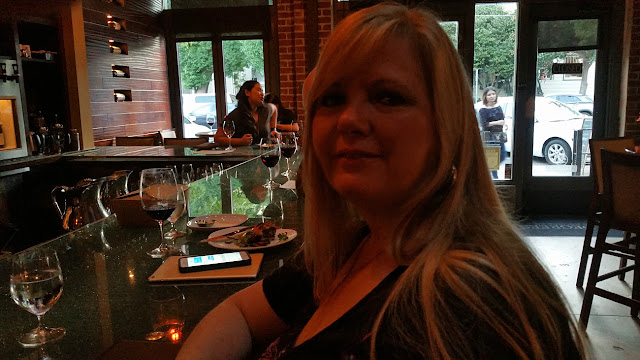 My wife as we sip wine.  The dinner was awesome also. 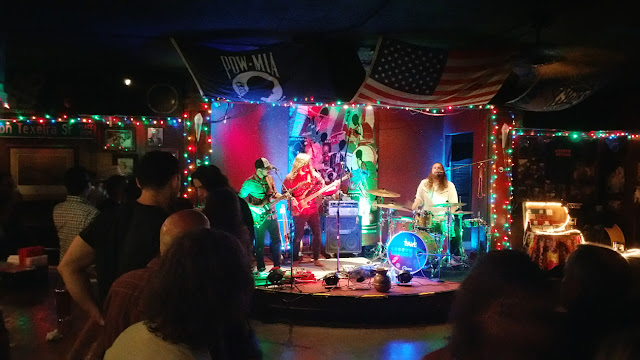 Then we wandered over to the Torch Club and heard a band called Groove Session...what an awesome band!  Listen to the tracks below.  Sorry the sound is crappy on the first one, I used by wife's phone and she had a protective cover on it which muffled the sound - I didn't find this out until we got home - but just watching the video you can tell how awesome this band is.  They play SoCal often so keep an eye out for them!
Posted by J at 5:14 PM No comments:

I picked up the boys from their mother's workplace one afternoon this week to take them to our house after school.  I picked them up in my truck.  Since it is a single cab with no rear seat, the law states that they can ride in booster seats up front.  This is the only time these boys get to ride up front since all other vehicles in the family have a back seat and thus they are required to ride one row back.  They get a great view out the windshield in my truck, so they love riding in it.  We have some wonderful conversations during our rides!
This particular day was very very warm.
“Wow!” I said as we buckled ourselves in, “it is really toasty!”.
I pulled the truck onto the freeway.
“Look at that!  It’s 105 degrees!”
“Where do you see that”, asked Troy.
I pointed to the tiny number embedded in the rearview mirror.
Teo asked to see also and soon we were all watching the little digits in the corner of the mirror.  As we drove westward, the display changed to 104.
"Look at that!”, I said, "It is getting cooler as we drive!  I bet it is down to 100 degrees by the time we get home!
Troy asked me why that would be.  I explained that we were driving westward and as we get closer to the ocean, the temperature gets cooler.  We live about 10 miles from the coast, so it should be much cooler by the time we get there.  We made a game of it, watching as the temperature dropped to 104 to 103 to 102.  Troy said he bet it would get to 99 degrees.  The boys had fun watching the temperature change on the mirror readout.
Teo wondered what the temperature would be like at the ocean.  I told him we wouldn’t find out because we would be turning soon, but if we kept going straight we would end up in the ocean – after we drove through a house.  Teo’s mind contemplated that.
“What would happen to the truck if it went in the ocean?”, he asked.
“Well, it wouldn’t run anymore."
“Why?”
Troy joined the conversation:  “because the wires would get wet.”
“That’s right”, I confirmed, “and water would get in the engine.  Since the motor is designed to take in air and not water, water would ruin the motor and it wouldn’t run”
“See all of the electronics on the dash” I pointed out, “It would all be ruined because it has wiring in it that wouldn’t work after it became wet.”
As we exited the freeway and headed north, I explained that it probably wouldn’t get any cooler because we were going parallel to the coast now.
But we continued to watch the readout, and in the next 3 miles to our house it did indeed drop to 99, 98, 97, and 96.  When we pulled into our driveway it dropped one more time to 95.  The boys were very excited to learn about temperatures and to actually watch it change visually.
In the span of 15 minutes,  the boys received a quick lesson on temperatures,how direction and coastlines affect them, and the effects of water on electronics.   A great use of time!
Posted by J at 4:32 PM No comments:

A few weeks ago we arrived at an outdoor, upscale Carlsbad mall about a half-hour early for an appointment. The boys and I decided to kill a little time by walking around the mall in the crisp morning air.  We came upon an upscale toy store that had just opened for the day, so we stepped inside the small store as the bell broke the silence to announce our presence.

We were the first customers of the day.  The store was spotless, the shelves were stocked, and the staff didn’t really have anything else to do but watch us as we meandered.  Not in a bad way, but we were the only things visible that broke the monotony of staring at the same shelves they've stared at for week upon week.    As we walked around, I wanted to be as unobtrusive as possible.  “Don’t touch anything, just look!” I said in a hushed voice.

As added incentive, I told the boys I’d buy them each something for $10 or less.  This gave them something to do and helped give a subliminal lesson in the value of items.  As we walked down one aisle, we came upon a flat wood table display with toy wooden cars on the surface, calling out to youngsters in hopes it would entice them to coerce their parents into a purchase.

"Look!", Teo said as he reached out for a car.
“Don’t touch!” I whispered.
He paused for less than a second and said “Then what are they there for?"

It impressed me that a five year old is able to use such great reasoning - I know of many an adult who aren't as good.

I laughed and patted his shoulder,  “Great point, Teo!  Great point!"
He beamed knowing that I recognized his ability to discuss things at an adult level and his new-found ability to win a discussion with Grandpa.

A splendid morning!
Posted by J at 4:23 PM No comments:

I can't put into words how sad the death of Walter Becker, half of the famous Steely Dan, makes me.  Their music touched me very deeply, starting with Pretzel Logic when I was 15 and trying to re-establish roots in a new city,  to Aja which came out in my senior year of high school, to Kamakiriad and 11 Tracks of Whack that I listed to via headphones as I wrote code tucked deep in my cube at work.

Walter and Don wrote some amazing stuff, and their attention to detail came through loud and clear to me.  They expressed many thoughts I could relate to, and did it in such a disarming way that it really puts the listener at ease.   Listen to Any Major Dude sometime - it encourages the listener that better times are just around the corner.  Something a 15 year old plopped down in a new city, needing to create an entirely new life from scratch, needed to hear.

Now, I'm not saying all Steely Dan music was great.  I never did really connect with their post 2000 music (Two Against Nature and Everything Must Go) though I''m willing to give it another go.

But their stuff from mid 1990 and earlier, that I really get.    I think this guy nails it right on the head...

Rest In Peace, Walter Becker.  Your music will withstand the test of time.  Something I can't say about a lot of music today.